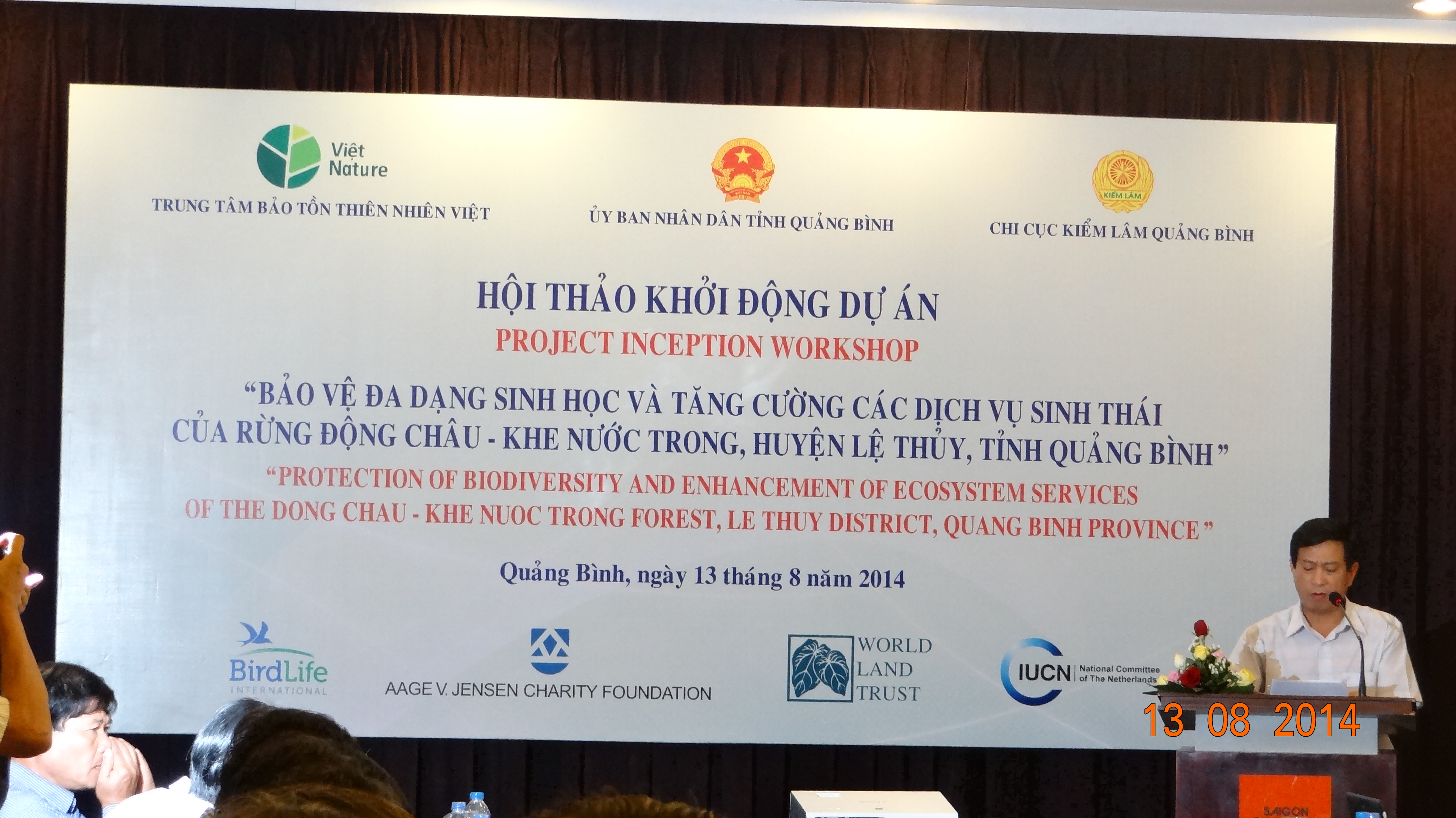 Đồng Hới, Quảng Bình – This morning, 13/8/2014, at Sai Gon – Quang Binh Hotel, Viet Nature Conservation Centre and Quang Binh Forest Protection Department launched their project entitled “Protection of biodiversity and enhancement of ecosystem services of the Dong Chau – Khe Nuoc Trong Forest, Le Thuy District, Quang Binh Province”. This project is planned to last 30 years, with funds secured for its first five years (2014-2019) amounting to nearly 1,5 million US dollars, from three international NGOs: BirdLife International, IUCN Netherlands and Wolrd Land Trust. This is a technical assistance project, with the overall goal is to secure the perpetual integrity of the unique biodiversity values and enhance ecosystem services of the wet tropical lowland forest in the southwest of Quang Binh and Northwest of Quang Tri provinces, with the “core” area of nearly 20,000 hectares, which is now under the management of Dong Chau Watershed Protection Forest Management Board (Le Thuy district, Quang Binh). The project aims to build forest and biodiversity protection capacity of the Dong Chau Management Board, with the collaboration and participation of neigbouring forest owners. Besides support to forest law enforcement activities, the project will also mobilizing resources to contribute to livelihood improvements for communities living around Dong Chau Watershed Protection Forest, promote sustainable forest resource management and reduce wildlife poaching in the area.

An innovative and pioneering aspect of this project is, for the first time in Vietnam, resources for long-term (up to 30 years) forest protection and management was mobilized from voluntary carbon finance from the private sector, via the “carbon balanced” programme of World Land Trust (an NGO registered in the UK). Another special aspect is that this project supports biodiversity protection and management in the Protection Forest category, outside the Special Use Forest/protected area system, which helps expand the Special Use Forest system in effect. Last but not least, for the first time in Vietnam, this project includes an activity of forest environmental lease for long-term biodiversity research and conservation in a watershed protection forest. Also in this launch, Viet Nature and Quang Binh Forest Protection Department announced the results of their biodiversity surveys using camera traps conducted at Khe Nuoc Trong from 2011 to date, confirming that the area’s outstanding biodiversity in Viet Nam and in the world, with the presence of all four mammal species, newly discovered in Vietnam in the recent decades and all new to science, namely Saola Pseudoryx nghetinhensis, Large-antlered Muntjac Muntiacus vuquangensis, Annamite Muntjac Muntiacus truongsonensis and Annamite Stripped Rabbit Nesolagus timminsi. Camera trap surveys recorded 57 wildlife species, including 31 mammal, 24 birds and 2 reptile species; in which 8 are globally threatened or near-threatened. Specially, the surveys also photographed Saola – an extremely rare and globally threatened at “Critical Endangered” level. After more than a decade of paucity of sighting in the wild, in Vietnam Saola was only photographed at the Saola Nature Reserve in Quang Nam in September 2013 (by a joint project between WWF and Quang Nam Forest Protection Department) and this time at Khe Nuoc Trong, Quang Binh in July 2012 and June 2013.

Scroll back to top