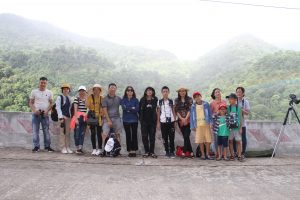 Group of participants in July, 2019

Dong Chau – Khe Nuoc Trong is located in Le Thuy district, Quang Binh province, is the last remaining patch of rare lowlands moist evergreen forest, covering an area of ​​over 22,000 ha. This is an area adjacent to the Vietnam – Laos border and Bac Huong Hoa Nature Reserve, Quang Tri province. Many of fauna and flora species found in the ​​Dong Chau – Khe Nuoc Trong forest are endemic to Vietnam and precious to the global biodiversity. Red-shanked Douc Langur is an endangered species discovered in a large number in Khe Nuoc Trong forest, they are so-called the “Queen of Primates” with brilliant bristles of five colors. The event was organized with aims to establish a nature love, raise awareness of the natural world and wildlife conservation for the younger generation who might grow up as future environmental leaders.

The trip took place in one day and set off from Dong Hoi city. Participants had an opportunity to admire the beauty of a wide range of mountains and forests and set their eyes on the canopy to search for the Red-shanked Douc Langur in the early morning. When the sun rose quite high and the Red-shanked Douc Langur was hidden behind the canopy, the participants could take a walk in the forest, discovered insects and plants or rested on the banks of clear streams. Thanks to these activities, the participants had a chance to experience one day without phones, internet and got away from the busy of city life. 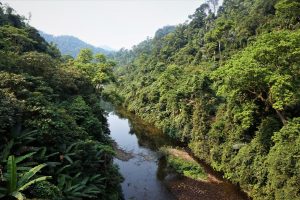 “What I like most are walking in the forest and using the telescope to watch the Red-shanked Douc Langur,” said a young participant. In addition, the children also took part in cooking meal with parents and  a drawing competition on the topic of wildlife protection after lunch break. After the trip, everyone had positive feedback and expected Viet Nature to organize more similar activities to explore nature and animals. 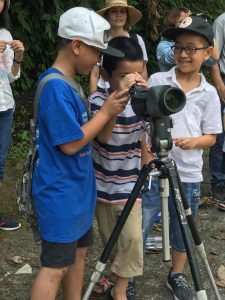 It is expected that the event of exploring and discovering Red-shanked Douc Langur will be held regularly to create opportunities for many people to be aware of the beauty of nature and wildlife in Dong Chau – Khe Nuoc Trong forest.