Viet Nature Conservation Centre, sponsored by BirdLife International, KNCF Foundation and The Body Shop, organized an exhibition entitled “Joining hands to save wildlife” at the campus of the Saigon – Quang Binh Garden Café and Children’s House in Quang Binh province on August 8th and 9th, 2019. The exhibition is organized with the aim of promoting the natural beauty of Khe Nuoc Trong Proposed Nature Reserve, in Le Thuy district, Quang Binh province and at the same time enhancing people’s awareness of wildlife protection. 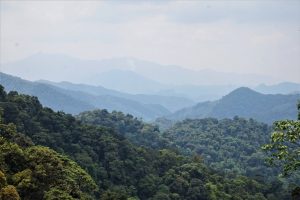 Dong Chau – Khe Nuoc Trong forest covers an area of ​​about 22,000 ha, which is considered to be a unique biodiversity area of ​​Vietnam with many rare and precious species of animals and plants. More than 40 globally threatened animal species have been found here. In addition, four new-to-science species have also been found here for more than a decade since 1992 namely Saola, Large-antlered Muntjac, Annamite Muntjac and Annamite Striped Rabbit. However, the animal species at Khe Nuoc Trong are threatened with extinction due to the loss of their suitable habitat (logging, shifting cultivation) and hunting. 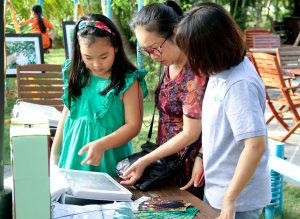 Visitors are seeing photos in Vietnatue’s albums at the exhibition

Attending the exhibition, audiences had an opportunity to discover the beauty of Khe Nuoc Trong forest as well as acquire information about the rare and precious wildlife species here through pictures, photos, posters and short films at the exhibition area. Additionally, the children and their parents could also participate in interesting interactive activities such as painting, drawing, playing or joining creative corners to make useful things out of wastes. The message that the exhibition wants to reach audiences is “let join our hands together to save the beauty of nature and wildlife”. 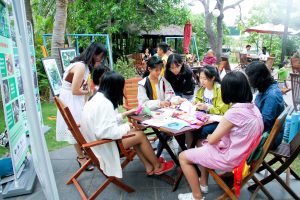 Children join some activities in the exhibition 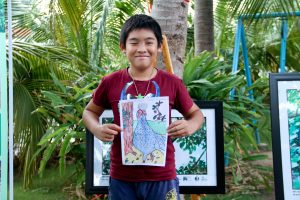 The exhibition has attracted the attention and support of many people, not only people living in Dong Hoi but also tourists from other neighboring provinces such as Da Nang and Hue. Following the success of this exhibition, Viet Nature plans to organize more exhibitions to reach different people e.g., high school and university students in Dong Hoi city within this year.