The purpose of the “exhibition combining propaganda on wildlife protection” is to raise awareness for the young generation on natural conservation in general and the protection of rare and precious wildlife animals in particular, and simultaneously call on all people to join hands to act for natural heritage preservation. 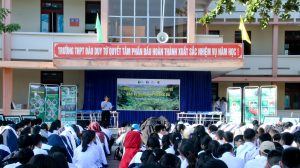 A project staff made a speech for the opening

Participating in this activity, there are nearly 1,000 students in grades of 10th and 11th with all the teachers of the school. The students had opportunity to understand biodiversity conservation and rare wildlife better through knowledge contest, debate conmpetition and photo and poster exhibitions at the event. Debate competition with the topic “We do not support hunting, trapping wild animals for food and trading because of poverty” took place excitingly. The two teams took turns to make arguments to defend their opinions: 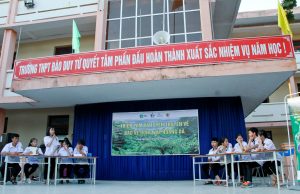 Other points of view mentioned the social issues:

Although this is the first time the students have participated in debate and according to the law of debate, the jury did not conclude which team was right and which team was wrong, but the points that the two teams made showed that they cared about wildlife protection. The questions they posed are also the challenges that humans are facing nowadays.

Viet Nature gave the certificates to the members joining the debate

The exhibition and propaganda on wildlife protection were successfully organized with the support and cooperation of the school board, the school administration as well as the enthusiastic participation of all students. We believe that the program has made a positive change in the awareness and actions of students involved in protecting nature.